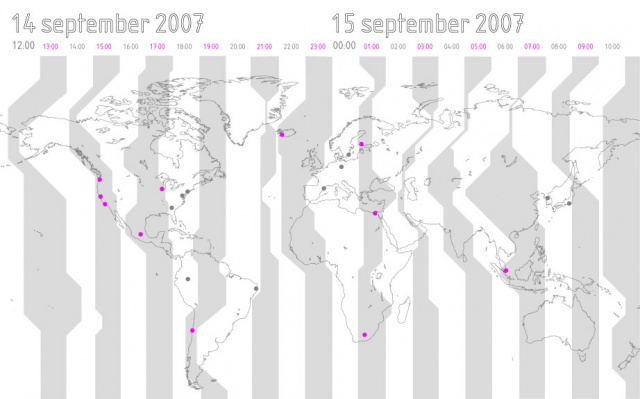 Invited multi-disciplinary participants from 21 cities around the world will contribute individual public projects that comprise one connected, simultaneous event.

As a curatorial collective, we are interested in wireless network systems existing not only through the use of computers and the internet, but through a human awareness of simultaneous participation and collective consciousness.

The invited participants experiment with anthropology, architecture, cartography, design, graffiti, kinetics, musical performance, sound and text. There will be walking tours through Seoul, silent meditation in Brooklyn, music in Helsinki, a parade in Chicago… We include these intersections not only as part of our investigation into psychogeography as a global phenomenon, but also to contribute to a networking system that exists within and without technology — public activity in which the experience is more heightened by being aware of its relationship to other simultaneous public activities.

Linking all of these events is a prescribed date and starting time (i.e., all projects are committed to beginning at 18:00 EST and the equivalent moment in other time zones). Serving as an announcement tool, archive, and network, www.21citiesatonceperformed.info is a blog that will complete the connections with maps, sounds and other documentation of performances.